This year boys soccer switched from the Bay State League to the Tri-Valley League, finishing the season with a record of 4-13-1. The captains were junior Anthony Marchant, senior Valter Santiago, and senior Julyanny Peguro and later adding junior Tj Fehm, junior Jayden Ryan, and senior Finn Kelley; they held the team to high standards and kept them motivated. Norwood won against Millis (3-0), Stoughton (3-1), Ashland (3-1), and Bellingham (1-0). Goalie Valter Santiago kept the team in a lot of games. Sophomore, Jagger Jeannetti was the leading goal scorer with 3 goals. There were 6 seniors and they were an asset to both offense and defense. They had high hopes for the season but came short of playoffs. They are losing 6 seniors this year and are looking for more options for players next year. Seniors, Finn Kelley and Valter Santiago were big parts of defense, Erik Danehy was striker scoring 2 goals and 3 assists. Seniors Julyanny Peguro and Dan Pugatch were big parts of midfield, helping build up plays combining for 3 goals and 4 assists. Sean Pugatch was the energy of the team as striker and winger. Next year they hope for a better season with the new team. 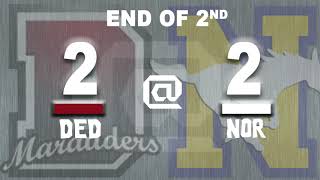